Where’s the Bozone Layer When You Need It? 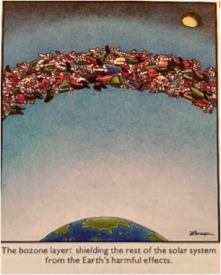 OK, so I tried just adding a comment to a recent posting by one of my favorite boggers, Jan Resseger.

In reporting and commenting on a decision by the Ohio State Board of Education, “Wisdom Prevails, for Once, as Board Members Set State Math Test Cut Scores”, Jan once again demonstrated the skills and insights that characterize her reporting. But I felt I had to do something to deal with the frustration raging in my belly. It didn’t work. So here goes.

Moving on…The post in question deals with an ongoing controversy in Ohio (not the only state, by the way) over the establishment of cut scores for the state’s new large-scale assessments.

For a quick and dirty refresher, the cut scores are the arbitrary scores set to establish the assignment of the various performance levels used for reporting of student learning. These scores are set by the state (usually by the boards of education) and frequently completed in collaboration with a committee of statistical experts.   Sometimes, these cut scores are recommended prior to the review of the actual test questions and the perceived degree of diffculty… Are we beginning to see the need for Bozone protection here?

While the discussion regarding the validity, accuracy and usefulness of these arbitrary scores has accompanied the wide-spread use of large-scale, state-wide assessments, only recently has the discussion openly included the reality that such scores might be, and apparently are, used to support politically motivated actions.

So here’s the Cliff Notes version of the debate covered by Jan in her post. The state of Ohio had terminated its contract with PARCC and hired the American Institute of Research (AIR) to develop and administer this year’s test. According to Patrick O’Donnell, the education reporter for the Plain Dealer:

“Preliminary test scores on Ohio’s new Geometry and Integrated Math II exams… show that the tests were such a mismatch with student ability that fewer than one out of every four students who took them met state benchmarks.  The state had predicted that 59 percent of high schoolers would score as ‘Proficient’ or above on the Geometry exam, but only 24 percent did.  Similarly, 56 percent were projected to score as ‘Proficient’ or above on the Integrated Math II exam and only 21 percent did.”

So what did the state do when faced with the prospect that significant numbers of students might have their graduation requirements compromised by the scores?

As Jan points out…

Too often the people setting the scores in the test-and-punish ethos that has dominated our society are anxious to “protect the quality of the diploma” and guarantee “college-and-career-ready.” There hasn’t been so much worry about the quality of the schooling experience itself.

So, of course, they argued about the need to “maintain high standards”, emphasized that such scores are good “to motivate students to work harder”, and argued for the need to avoid caving to the “trophies for all” mentality that has apparently sapped the moral character and industriousness from out youth. The Ohio Department of Education officials argued that the performance of students was not accurately reflected in the test results (apparently ignoring for a moment their role in establishing the cut scores used to determine passing rates) and that the cut scores should be raised. They asked the state board members to raise the scores so that 52 percent of students would be rated Proficient or above on the Geometry test and 35 percent Proficient or above on Integrated Math II… apparently there was rationale for the magic of 52% as opposed to, say, 49%. I would expect to see this discussion about the ‘magical’ 52% on the John Oliver Show some time real soon now. Perhaps making the case for an even thicker Bozone Layer.

Jan and I rarely disagree; however, in looking for a bright spot in all of this, she refers to the recommendation and the board’s acceptance of it as a display of common sense. I, on the other hand, see it as a continuation of the lunacy that had driven the development and implementation of the standards/assessment solution to education improvement. Talk about the difference between doing things right and doing the right thing.

Of course, trying to fix the obvious problems with the Ohio assessment and cut scores issues is an attempt at doing things right. It’s also a great example of how trying to do the wrong thing right just makes things “wronger”!

Let me conclude this little rant with a few questions … (1) If you were going to attempt to solve a critically important issue such as what should our kids be able to do as a result of spending 13+ years in school, who would you put in the room? Let me guess. It might not be state and/or national politicians and politically appointed members of the US Education Department… at least not without an significant increase in the Bozone layer to protect our kids, our educators, our families, and our future from the harmful effects of these ill-informed reformers. (2) How did we, as educators, allow the discussion of improving the learning experiences for our kids get so far afield? (3) Isn’t it past time to start thinking of ways that we can begin to act as if learning really matters?

As Ken Robinson points out, the ability of these “reform” folks to develop such creative names as No Child Left Behind, Race to the Top, and, now, Every Students Succeeds demonstrates with doubt that, while they may know little about teaching and learning, they certainly understand irony (and I think that may be an ELA standard). It time to activate the Bozone Layer!