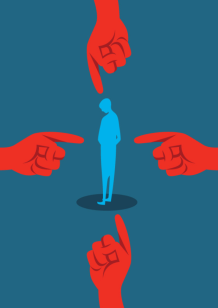 I don’t know if you’ve noticed but one of the first questions asked after any kind of unpleasant event is “Whose fault was it?”

On one level, such questions serve a very useful purpose – they keep us from having to explore the possibility that we may have to own what went wrong. Identifying someone by name, even better, being sable to display a picture of the responsible person, offers us a sense of order, sense of justice, and, even, a sense of security.

With the release of A Nation At Risk in 1983, we identified not only the problem (poor academic achievement), but also the culprit – the American school system.

We had completed a test-drive of this thinking immediately following the Soviet launch of Sputnik in 1957. We were told that the blame rested squarely on the shoulders of our schools for not producing a sufficient number of scientists and world language teachers. No one need look deeper for other, perhaps more salient reasons. We were told who was responsible and we accepted it. We had our villain.

Now, with A Nation at Risk, we not only solidified our belief in the failure of our system but we also blindly accepted the recommended solutions. No need to look further. Our schools were too soft. We needed more rigor. We needed more time in academic subjects. We needed better schools.

There you go. All is now right with the world. We’ve found the culprit. We don’t have to look at the data. We can ignore that kids in wealthier suburban districts were doing well and that kids in poverty were not. It’s the teachers. We can bring “better” people into the profession through programs such as Teach for America. That’ll do it. But wait, it didn’t. With very few exceptions, poor kids in largely falling down and under-resourced schools continued to reflect the problems of generational poverty and the struggles of life in the inner cities.

So let’s consider this. Perhaps it is the teachers. Perhaps it is the teachers doing precisely what we’ve trained them to do – and what we trained them to do that was geared to a level of expectation before the arrival of A Nation At Risk, before the 24/7 access to the stuff we had been charged with pouring into their heads, before the revolution of social media – before teachers were called upon to do things that they had never been trained to do and which run counter to their experiences as students themselves.

If it is the teachers, let me share that is not because of lack of caring or commitment – the kind of caring and commitment that I have seen over and ever again in the more that 50 schools and districts I have observed in the last decade. It is precisely the caring, the commitment and the devotion that prompted one young lady I interviewed to tell me, “The teachers at this school are annoying. They won’t let me fail.”

I believe that it is the teachers but, most importantly, it is the culture we’ve deliberately created in our schools. It is a culture that prizes compliance and efficiency over learning. It is a culture that focuses attention on a limited number of academic subjects, too frequently at the expense of the very things that we hope to engender in our students. It’s a culture that does this far too frequently at the expense of the time they desperately need to discover and explore their passions. It is culture that seriously shortchanges the need to help students learn how to be in a world that is becoming increasingly foreign to the adults charged with helping them find their way.

The road to moving beyond the “blame game” is one where:

It is road on which we bring increased intentionality to the role of teacher and school leader – an intentionality defined by causing learning. It is a road where we provide for teaches the clarity of purpose, the autonomy and the opportunities for mastery that Dan Pink suggests in his work on Motivation.

It is a road that defines our schools as centers of learning – centers that design engaging learning experiences for our students and ourselves, centers that can facilitate and collate the learning of students wherever it occurs. It is road on which these places are staffed with the dedicated, caring, and supportive people that a have always defined the best of the teaching profession.