Note: This post is long… It may require one or more adult beverages.

It draws heavily on the work of Will Richardson. If his words and thinking resonate with you, you might be interested in checking out these sites: Modern Learners and Will Richardson’s blog . Also, my thanks to Eric Fiedler, the principal at Lacey Elementary School here in NJ.  He is a consummate adult learner.  His questions, his curiosity and his reflections continue to be a guiding voice in my explorations of leadership.   This piece  is much better for his willingness to collaborate.

As is now becoming the norm for my writing, this piece, too, started out as something different. I had planned to make the transition from the recent focus on leadership to an exploration of Will Richardson’s contributions to the discussions about the need to move beyond “schooling” to a focus on how do we cause powerful learning. The beginning of what has evolved here remains pretty true to that intent; however, once again, life intervened.

In a recent conversation with Eric, he mentioned that he was now beginning to ponder how he might open the conversation with his staff about the dissonance between the current focus driven by federal/state mandates (dominated by the emphasis on accountability, assessments and test scores) and the need to focus conversations and intentional actions on what kids need to know, be like and be able to do in order to be life ready. He is an excellent school leader and has clearly (and successfully) lived a commitment to caring conversations, the building of strong relationships as well as to the development of a sense of trust and safety for both kids and adults alike. In spite of this, he expressed concerns that his message of the need for reorienting school-wide actions with core beliefs would be heard by the staff as a message of failure, a message of disappointment with their efforts, a feeling of “not good enough”.

I asked if he would join me in the development of a plan that might serve as guidance not only for his work but also for others struggling with similar concerns. What you’ll be reading is the blending of two perspectives: mine, seen largely through the perspective of my coaching role and his, reflecting his daily, on the ground experience leading a school in today’s environment.

A word of caution: In my years working with the International Center for Leadership in Education (ICLE) I often heard Bill Daggett emphasize in his talks that each school has “its own DNA”.   What that means is that no model plan will fit each school. What we are looking for as we write are guidelines for a journey, knowing full well that in one school the steps may have already been accomplished and in others that same step may require much greater attention.

In my world context is king. There is growing consensus that the context for the work we are proposing is defined more or less by the following:

It is against this backdrop and within this context that leaders find themselves looking for ways to encourage a fresh look at how we might bring our beliefs about kids and learning into closer connection to our actions and practices.

This post is based on the belief, as well as the examples we have seen, that there is an alternative to the fear, compliance, and self-protective responses. It involves:

Note: A critical steps in this process involves the development of a collective commitment to understanding of what it is like to be in the shoes of the “other” (whether that “other” be kids, parents, fellow teachers, or school leaders) at this time of intense pressure and waning support.

In a previous post, I shared that that the primary cause of falling into the trap of  focusing on doing things right rather than doing the right thing is the tendency of organizations to allow the desire for efficiency and convenience to gradually and often imperceptibly move us away from our beliefs.  For example,  while we believe (and have strong supportive research) that all kids (and adults) are different – that they learn in different ways, and at different rates – we have developed organizational practices and patterns which conflict with this belief.

A while back I shared with you a slide from a TED Talk given by Will Richardson in Vancouver. This is an exceptional talk and I would urge you to take the 16 minutes to look at it. It offers a great explanation of the challenges facing us as we look at moving beyond “schooling” to learning. Richardson’s talk along with several by Ken Robinson offer us language that we can use to help the members of our education community recognize that ‘marching backwards into the future’ holds no promise for our students and adds increasingly to the frustrations of our teachers.

Step 1 – Working though the belief process – one approach

But beyond adding to the depth of our conversations about context, Richardson’s talk also highlights the ways in which beliefs and practices are too frequently in conflict.  The slide I previously shared from Richardson’s presentation was one which combined two concepts that he was using to introduce his talk.

Richardson shared that in his years traveling the world to visit schools and do presentations, he has asked over 50,000 people to describe the conditions where deep learning occurs╔ learning that is productive, learning students engage with and which they will remember. I want to take a look at the two concepts here separately.

Richardson’s first slide lists the most frequent and most consistent responses to the question “What are the conditions that are present when we experience deep, powerful learning?”

On this next slide, Richardson lists what most of his audiences (and I suspect you as well) have listed as the conditions which actually exist in most schools. 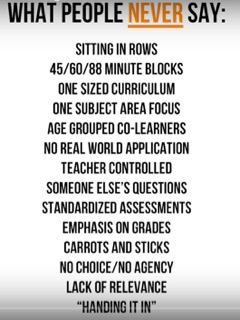 Richardson’s two slides about the dissonance between what we know about the conditions for deep powerful learning and the actual conditions under which such learning takes place in schools seem an excellent starting point. In ‘olden’ days this used to be known as “gap analysis”,  looking at the difference between “what is” and what “we wish” and looking at ways to close that gap.

Example: Look at the first few conditions that Richardson identifies as being at odds with the conditions that promote powerful learning – sitting in rows, fixed time blocks of 45/60/88 minutes, one sized curriculum, one subject area focus, aged grouped co-learners. And now we come back to the role of leadership. Without the relationships, trust, and followership that we explored in earlier blogs, a serious discussion of the gaps between our beliefs and our actions is unlikely. Suggestions (or worse, mandates) for eliminating or modifying these result in responses dominated by fear and self-preservation of the status quo – i.e., the safe and familiar. At best, one gets compliance and another ‘program’ that staff members can add to the already too long list of things “we used to do”.

And so the first step in that “belief gap analysis journey” comes back to an understanding of leadership and an assessment of the current culture of the building.

In the best of all worlds, the school has a great culture, one where the relationships are deep and caring, the levels of trust high, and the sense of safety and openness to risk taking are pervasive. But what if they’re not? How do I deal with obstacles when the culture in my building is less than ideal? Perhaps I’m new to the building and have inherited the results of less effective leaders. Perhaps my previous behaviors have contributed to the culture and I lack confidence in the level of “followership” in the building.

As we’ve explored such possibilities and reflected on the places we╒ve seen where such obstacles exist, we decided offer two approaches. The first of these is based on schools in which the desired culture of trust and safety has been successfully formed and nurtured.

The second approach is geared to places where there isn’t sufficient trust and safety to move beyond responses that would be characterized by fear, self-preservation, protection of the status quo, etc and involves the need to work on two fronts: the development of the desired components of a positive culture and the commitment to what we call “little bets”. The work in such circumstances is not necessarily harder, but it is slower.

Once the context for the discussion has been established, a leader’s next step in the process of developing understanding and commitment to the ways in which the school as learning community might approach discussions relating to the need to align beliefs and actions is an honest assessment of the culture.

If the DNA supports and nurtures a culture of trust and safety, productive and  meaningful discussions with the entire staff are possible and, most frequently, welcomed.

If the DNA of your school does not include a pervasive culture of safety and trust, it is unlikely that whole staff discussions of beliefs and practices will lead to much.

In short, where the school’s DNA does not include a wide spread culture of strong leader/staff relationships or a culture characterized by feeling of trust and safety, it is possible to engage smaller numbers of ready and willing staff in conversations of context and belief/action consistency. Not only does this move the issue of belief/action resonance along, it also provides onlookers with the opportunity to reassess their concern about trust and safety.

Caveat – the activities of their “bet” cannot disrupt the lives of those not involved in the initiative. In an earlier blog earlier blog I referenced the Apollo School in York, PA. This “school within a school” or micro-school exists within a larger high school and serves as an excellent example of the ways in which little bets can provide “test kitchens” for ideas without negatively impacting the less adventurous.

This is a pretty long piece.  There are more details that we can share; however, what to share would be best determined by you, the reader.  If you would like to dive deeper into any of the steps or thoughts in this plan overview, let us know and between the two of us, we’d be happy to continue the conversation.