Actually, that’s a lie. I beg you to share it.

A bit of history

Bernie Josefsberg and I crashed and burned together in the 1980’s after having been recruited (Bernie from New Trier HS in Chicago and me from a few miles away in rural NJ) to do something wonderful in a local high school. Our reach for wonderful far exceeded our grasp and, after a few years, we were left with a deep and lasting personal relationship and some pretty tough lessons about bringing change to school cultures. We both moved on in separate directions – each of us exploring leadership roles that would eventually lead us to this point. At one of his “new homes” Bernie penned the following piece which he was kind enough to share with me during one of his recent bouts of file purging.

I have struggled at times (most of the time actually) to find the words that might be the key to unlocking the door of understanding for parents and educators… the understanding that the needs of today’s learners are not being and will not be served by trying to create better models of the schools they attended. The necessary responses to this challenge will not be found in doing school better. They must be found in doing learning better.

In his letter to his staff in 1995, Bernie found the words. This letter generated and continues to generate a variety of responses. Both Bernie and I would love to read yours.

I hope you find Bernie’s thoughts enjoyable and his words useful. Enjoy. 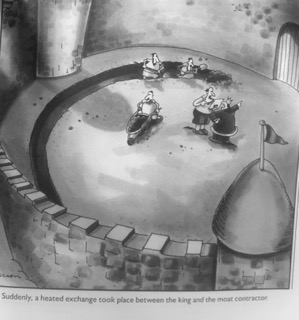 The Far Side Gallery 4 – Gary Larson

NO MORE DIRTY LOOKS: A SCHOOL FOR THE 21ST-CENTURY

Prompted by the advent of the 21st-century as well as compelled by the current contents of schooling, many professionals, policymakers and laypeople are offering their visions of 21st-century schools. I’d like to join the crowd and offer the humble suggestion that we get rid of the school disciplinarian. At first blush, this idea seeing might seem nutty. After all, the end of the 20th century does not arouse spontaneous cheer about the human condition nor about the status of such values as honesty, self-control or hard work. Since we are awash in the nasty effects of impulsivity and self-indulgence, it hardly seems sane to eliminate the one individual in the school charged drawing lines and imposing consequences. At the very least, and even in the “best” of schools, a certain number of students experience the kinds of difficulty that require the disciplinarian’s particular attention.

Nonetheless we should forego the disciplinarian, provided we also relinquish the presumption that schools are primarily places that “contain” teenagers on the sidelines while real life occurs elsewhere. From this presumption flows a necessity for the coercive controls embodied in the figure of the school disciplinarian. So long as we perceive schools as places of adolescent containment, schools will continue to invite the very behavior that is properly deplored (though rarely eliminated) through the disciplinarian’s limited arsenal of punishments. Simply put, late 20th century teenagers do not make good inmates. Their experiences and knowledge distinguish them from preceding generations of high schoolers, as do their perceptions of what the future holds in store for them. Nor, given the requirements for healthy 21st-century living, do we want them to suppress their considerable energy and talents. Good inmates do not make for good students, nor more importantly, do they make for good citizens.

Paradoxically, the departure of the school disciplinarian will allow us to focus upon the true source of disciplined and responsible conduct – namely a self-governing interest in sharing the benefits of a community that is “care-ful” of its members. Many of the widely circulated visions of the future emphasize desired economic benefits, to be employed by those who have advantaged themselves through individual merit. Thus, the fully educated student of the 21st-century becomes the competent competitor in a globalized economy. Knowledge is power and the power we value is economic. We therefore envision ingeniously technologized schools that expand the supply of ingenious “knowledge workers.”

This is a legitimate concern. We should safeguard our economic well being by making schools technology enriched learning centers. Because of that technology, it should be possible to associates school with customized learning paths, instant performance feedback on “authentic” tasks and constant interactivity across cyberspace. Such capabilities will go along way toward reviving our schools.

However, my own futuristic vision adds some critical features beyond the technology. In my imagining, school becomes a humanely conceived place where young people acquire the arts of mindful living – a place where they learn to concern themselves with “common wealth” as the best guarantor of self health. Indeed, schools should be a place where students learn to set an extra place for their neighbor at the common table of our society. We each sit at that table and, from the standpoint of the person seated next to us, we are each someone’s neighbor. If nothing else, enlightened self-interest should give us pause not only for thought, but for thoughtful action.

More than machines are required to redeem our hopes for the schools into 21st-century. In its rules, roles, and relationships, the future school of my imaginings enacts an affirmative view of human nature. Its informing beliefs about teenagers, about how they learn and what they need to learn, will anchor arrangements that impel them towards productive and good adult identities. In such a place, the school disciplinarian, for lack of work, will have no role to play.