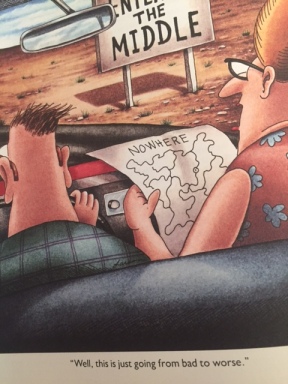 I’m sending you a link link to something written by a blogger that I’ve been following for a while now. You might ask “why me?” While this guy is very edgy and will scare any number of people with his references to predatory capitalism and social democracy, he represents “another brick in the wall” of thinking that has occupied me for a while now. I offer this in response to an experience that I suspect is becoming increasingly common for many of us…  Conversations that center around the question… what the f*** is going on?

To save you some work, the author is a fairly well-known speaker (on a top 50 list of international keynoters), has a background in finance and business organization, has written for the Harvard Business Review, and has been offering his thinking on the downward spiral of the US for some time now.  Unless all of this research is based on false internet info, he’s got some street cred.

So what’s this about?

As noted above, with increasing frequency, I find myself involved in conversations in which people describe a growing sense of foreboding and concern about the direction of our society.  Some of these are school related discussions but, most are focused on a bigger picture – the erosion of civility, values, norms, etc., many of which we had taken for granted as a part of American exceptionalism.  I’ve recently had several, seemingly unrelated experiences which have been gradually “coming together”.  Reading Haque’s writings on his site Eudaimonia (see link above) has been one such experience.

Also, as some of you know, I recently attended a “gathering” of folks to interact with Charles Eisenstein.  Charles achieved a certain amount of notoriety after appearing on the Oprah Sunday morning show, following the viral response to his essay, “The Election: Of Hate, Grief, and a New Story” which he wrote on the eve of the presidential election in 2016 and for his book, The More Beautiful World Our Hearts Know Is Possible. Charles speaks about the ending of a story here in the US and the problems associated with living in what he terms, “The Age of Separation”… an age in which we are separate from other people, separate from our institutions, and separate from our planet.  This separation has been described by others as a descent into fragmentation, tribalism and polarization. In a soul-touching series of conversations, exchanges, and reflections, Charles shared during the gathering his thinking about living as “interbeings” – people living between stories. He suggested that the path to the  new story described in his book, lies with the cultivation of empathy… a topic in itself.

Why Haque and Eisenstein? They seem like strange bedfellows.

Haque and Eisentein represent a growing body of thought that maintains that the direction of the US is not sustainable… that even superficial reviews of world history point to a repetition of paths that have led previous world powers to authoritarianism, to fascism, to ruin. I’ve shared the linked piece here because I saw in it a pattern that affirms what Haque is seeking to illuminate and which seems to demand a more active response. Here’s a quick look at the pattern he describes…

Listen. I get it. We’re all frustrated. Maybe we even feel powerless and weary. The system has failed us… Now, frustration makes us foolish. We lose our reason, our intellect. Our grasp on history slips and our respect for knowledge and wisdom erodes. Virtue becomes just that much harder to hold onto. We seek comforting lies to mollify us instead of difficult truths which enlighten us.

The pattern he describes and expands upon has both historical and individual applications.  He describes a process that is characterized by descent into frustration, finding/identifying scapegoats, demonizing those identified as “causes” for our frustration, acceptance of increasingly violent solutions to protect what we have and to gather more of what we perceive as “rightfully” ours.

Here’s what I saw as I read this essay.  I saw the patterns of our responses to the Irish, to the Italians, to blacks and I saw/see what appears to be predictable responses by these identified “others” to such treatment which tend to reinforce the beliefs and actions of the oppressors.  More importantly, I saw the need to share the exposure to people who both identify with this description of our direction/place and who might offer thoughts about possible responses.