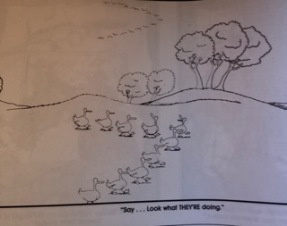 Sometimes I write for me.  Sometimes I write in the hopes that someone will read it. Right now I’m trying to find a healthy place between the dystopian writings of Umair Haque and the more uplifting challenges of  Charles Eisenstein.  I like Eisenstein but fear Haque.  I want Eisenstein’s world, but I see Haque’s. Haque writes daily of the problems caused by the way in which capitalism has evolved here in the US and in countries that have sought to model their economies after ours.  He terms this “predatory capitalism” and describes the consequences that follow when the quest for profit overrides our commitment to the value of one another, of our societies and of our planet.  Headlines such as ““Why We Need an Economics of Well-Being”, April 10, 2018 or “Why the Future of Leadership Isn’t About (More) Patriarchy, Capitalism, and Supremacy”, Sept 4, 2019 are not unusual. In contrast, Eisenstein writes and urges us to consider the world of the possible. The title of one of his books says it all, The More Beautiful World Our Hearts Know Is Possible. His essay, “The Age of We Need Each Other” seems like a flash of the blindingly obvious.

In the midst of my existential pondering, someone called my attention to an interview about the impossible cost of a college education.  The article was actually a transcript of an interview conducted by Chris Hayes (of MSNBC fame) with Christine Zaloom, the author of the book, Indebted.  As a part of his introduction, Hayes described the (then) recent events surrounding the college admission scandal.  Here’s an excerpt…

One thing that was interesting about this story, it was one of those rare stories, the Jeffrey Epstein story is another one, where Americans of all political persuasions rejoiced. It united Americans across the ideological spectrum in their contempt for the people that had done this. The right hates elite academia and Hollywood. And this brought them together. The left hates the insane culture of inequality and corruption that’s represented by this, right?

So it’s like there was someone for everyone to hate….

Although Hayes seems to have had a lot of trouble in using words like fascism, concentration camps, liar, etc. to describe the ongoing descent of American politics, he seemed to have no trouble making sure that we knew how great it was that “hate” was now a nonpartisan reaction/motivation.

I see hate and fear as responses inhabiting the same space. The relationship reminds me of a vignette in which one man expresses his fear of falling behind as follows…. “My neighbor has a cow and I don’t. I want his to die.”

Haque’s picture of where we currently are on our journey both as a nation and as a species is painted in the “cow” terms of zero sum thinking, of scarcity, of competition, of separation and, yes, of hatred, vilification, and tribalism.  Eisenstein acknowledges both the presence and the dominance of this perspective.  More hopefully, however, he  focuses on the opportunity to write a new story… a story based on connectedness and empathy.

Being focused (and as one dimensional) as I am  of looking at things through the lens of education, I immediately turned this into an educational question.  What are the causes of hatred in our schools?  Maybe you object to the use of the term “hatred” being applied to our schools? I would. But would you also object to the acknowledgement of presence of zero sum thinking (when someone wins, someone else loses), scarcity (grades have to be distributed with a limited number of “A’s”), competition (one valedictorian), tribalism  (jocks, nerds, stoners, etc.), separation (alternate schools, remedial classes, college prep, AP, etc.)  What do we do in schools to intentionally offer kids alternatives to these things? What do we do unintentionally to reinforce fear, separation, vilification (i.e., seeds of hatred) as an acceptable emotional response?  Are there practices which subtly reinforce these among our colleagues, among our kids?  Do we wish to “own” the responsibility for helping kids klearn “how to be”? If I were still teaching, would I thank Chris Hayes for giving me a “lesson” to share with my kids?

I’ll end this with a questionnaire created by Wendell Berry that was recently shared with me.  Maybe you could make up a “What would happen if…” question about Berry’s work. One of mine is… What would happen if we reframed these questions around our work with kids – i.e., “For the sake of test scores, how many bad practices/mandates am I willing to implement?  Name them.” or “In the name of high AP test results, how many kids am I willing to allow to be stressed, anxiouss, depressed? Name them.”

Couldn’t we at least try?